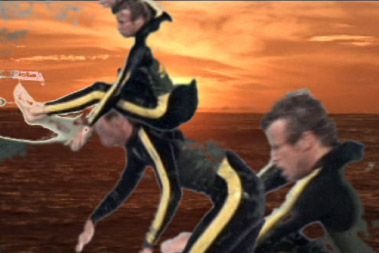 I keyed out the surfers from the first feature and plopped them onto the second (the fantasy waves.) This was remarkably, awesomely easy because the ocean behind the surfers is all blue, just like those goofy looking blue-screens used for Hollywood movies and karaoke videos. The process took about three mouse clicks, and works remarkably well considering the ocean was never intended to be used as a blue screen...